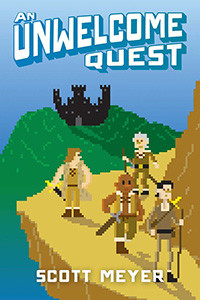 Ever since Martin Banks and his fellow computer geeks discovered that reality is just a computer program to be happily hacked, they’ve been jaunting back and forth through time, posing as medieval wizards and having the epic adventures that other nerds can only dream of having. But even in their wildest fantasies, they never expected to end up at the mercy of the former apprentice whom they sent to prison for gross misuse of magic and all-around evil behavior.

Who knew that the vengeful Todd would escape, then conjure a computer game packed with wolves, wenches, wastelands, and assorted harrowing hazards—and trap his hapless former friends inside it? Stripped of their magic powers, the would-be wizards must brave terrifying dangers, technical glitches, and one another’s company if they want to see medieval England—and their favorite sci-fi movies on VHS—ever again. Can our heroes survive this magical mystery torture? Or will it only lead them and their pointy hats into more peril?

“An Unwelcome Quest is an easy book to recommend as it’s a quick read, full of action and entertainment, and has some proper laugh-out-loud moments. . . . Hopefully this won’t be the last we’ll see of the Leadchurch Wizards (the ending certainly leaves plenty of room for more stories), but as it stands I can completely and utterly recommend these books. Great stuff.”